The above pdf is a very rough estimation of a delivery drone capable of an 8km return flight (16km one way) with a 4kg payload. Put the motor in and re-balanced it. Flew at around 14:00ish under power with about a 30kt NNE (15.43m/s) for backup glideability. Flew so well. Only hit about half throttle with a 4s. Had heaps of lift, so I’d say I could max out at about 1kg payload with more throttle. Now onto a flight controller before sticking the head tracker in. Being a bit too fried to do a proper stability analysis for Sentach, but having enough mind to sketch out the dimensions for the tip twist foil, the above shape emerged.

Designed to fit into the 50mm thick EPS sheet at 7degrees. It should kill the lift and thus tip vortex nicely. Same as Gemot, however Gemot is 7degrees and a far slower and more tolerant foil.

After watching all of the tutorial videos on XFLR5 yesterday I might do a stabilty analysis first…. Hmm maybe…. I also just want to test the head tracker and Sentach is a rough wing, not a refined design.

Playing around with XFLR5 I had a good time with inviscid flows, but no such luck with viscous flows. Either way it helps with visualising flows. I don’t know if the vorticies  around the fuselage you see in the following images are that true to form at 10m/s. At 20 m/s (40kts) it’s probably more real. Then again we can’t expect too much from 90 degree corners anywhere around the front of an airfoil.

All in all I think 7 degrees for the wingtips will be fine. After all this is meant to be a rough wing just to carry some extra weight for the FPV head tracker.

Interestingly it seemed to say the centre of lift was around 330mm back. We’ll see how that goes. 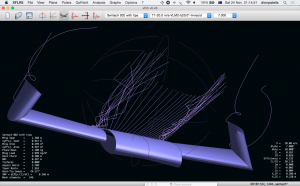 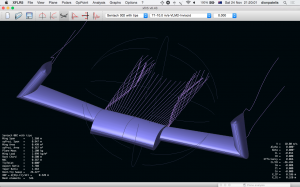 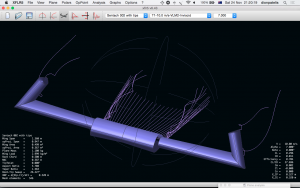 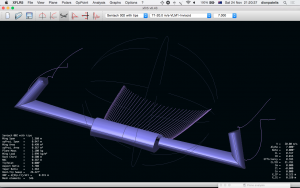 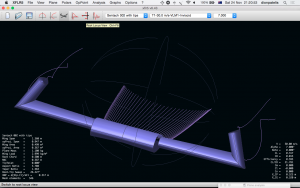 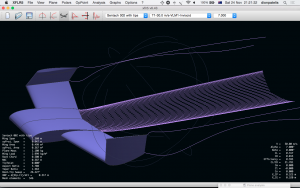 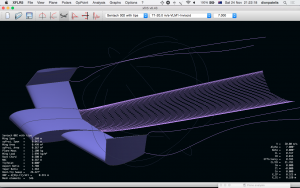 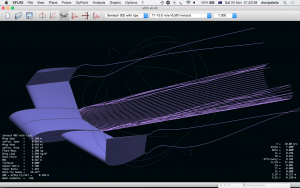 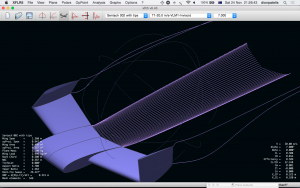 This new plane is for a slope soaring wing which I can mount the head tracker in and then convert it into a powered craft once it’s sloping well.

A name? Name, name ….. errrm name? Something nonsense word not readily used in English which we can make into a proper noun.

Hmmm..   “Sentach”, a quick images.google.com search. Nothing too offensive in there. “Yesss, that’ll dooooo!!!”

I’ll see if I can use XFLR5 this time.

OK we need a Reynolds number (Re) which is this number which allows us to compare a full size commercial air plane to our RC model and roughly know that they are similar. All you need is flow speed, viscosity and chord length to get your Reynolds number. All the foil design software programs use a Reynolds in some way or another.

Setting up the foil:

Keep the 50mm thickness as much as possible.

These following images show the difference in lift (the green lines coming up from the wing) and tip vortex when we put 7 degrees tip twist on the wing. It’s considerably less drag. Less lift with the tip twist, but the lift vectors are centralized  around the middle of the wing. Thus the wing will handle better, not tip stall, handle more wind and self stabalise quicker.

This video by Chrsto T outlines how to make XFLR8 work this magic.

These images explain quite well how Gemot works. 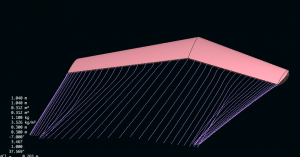 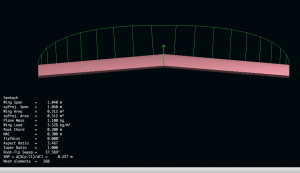 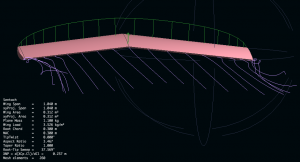